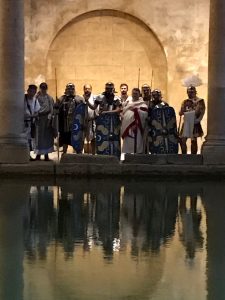 During one of Britannia’s Gladiator Guildhall Shows for the Museum of London, members John Wheeler and Marc Byrne were discussing the feasibility of fielding an ‘in house’ unit of elite bodyguards for the game’s editor (Sponsor). Normally a group member like Robert Moore or James Byrne gets to play a visiting Emperor, Young Caesar or Britannia’s Imperial Governor to add to the spectacle of the show.

The discussion led to more definite plans and soon members Kerry Ballard & Dylan Carter got involved, with the latter deciding to invest in some spectacularly blingy Praetorian Centurion’s kit. The III Cohors Praetoria Britannia were born.

The unit grew quickly, plenty of research was done and within 2 years we had a small Praetorian unit. The reaction was so positive from the public and clients that we found our unit was booked by Howard Giles events to debut successfully at a large function in the prestigious World Heritage site of Roman bath.

Before the time of the emperors (In the old Roman Republic), some Roman officers picked units of best soldiers to guard them. These units weren’t really official but started to be called Cohors Praetoria.  (Their name is thought to have come from the ‘Praetorium’, the large tent belonging to the general in the Roman army camp, their job was to guard it).

In 2B.C. Rome’s first Emperor Augustus made the unit more official. He then appointed two prefects as commanders.

The Praetorians were mainly stationed in Rome and there are many disagreements about what their armour and equipment actually looked like amongst modern military historians. (In the palace, on duty, many of them wore togas).

Sometimes the Emperors themselves would go to war and on these campaigns, they would take the Praetorian Guards with them, So it’s likely that smaller units would have accompanied more peripatetic (or warlike) Emperors on their jaunts to Britain. 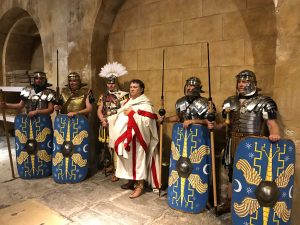 We know the Emperors Claudius (41-54 AD) & Hadrian (117-138 AD) both visited the fur flung province of Britannia with no doubt cold, wet and miserable units of Praetorians in tow.

The Praetorians were much more than just the Emperors bodyguard, they on occasion acted as the Imperators executioners, couriers and often ‘eyes and ears’ around the empire. The Praetorians were known to engage in espionage, intimidation, arrests and killings to protect the interests of the Roman emperor. For clandestine operations, they may have employed a special wing of troops known as “speculatores.” Formerly a reconnaissance corps under the Roman Republic, by the imperial era this unit had graduated to serving as couriers and intelligence operatives in the service of the Caesar. Speculatores and other members of the Praetorians would disguise themselves as ordinary citizens at gladiator contests, theatrical performances and protests to monitor and arrest anyone who criticized the emperor. They also kept tabs on suspected enemies of the state, and in some cases they even secretly executed those judged to be an imminent threat to the emperor or his policies.

So whenever the Praetorian turned up in Britannia you could be sure that life was never going to be dull!

When in battle or on active campaign outside the confines of Rome, the Praetorian Guards probably dressed very similar to most contemporary Roman legionaries. However because they had to guard the Emperor, their equipment was probably of the highest quality Denarii could buy. Their pay was much better than that of the average Roman soldier. Also, they only had to serve for 16 years in the army. (The average Roman soldier had to serve for 25 years). They also got a huge pay bonus every time a new Emperor came to the throne.

The Praetorians were not always popular amongst their contemporaries, they sometimes forced the Roman senators to accept their choice of new Emperor (Like Claudius) and sometimes they would kill emperors they didn’t like (such as the mad emperor Caligula). On one occasion they even auctioned the vacant Emperors position off to the highest bidder! According to the ancient historian Cassius Dio, after murdering Emperor Pertinax in A.D. 193, the Praetorian Guard tried to cash in on the power vacuum by placing the Roman throne on the auction block. Following a brief bidding war between former consul Didius Julianus and Pertinax’s father-in-law, Titus Flavius Sulpicianus, the Praetorians reportedly sold control of the Empire to Julianus for the enormous sum of 25,000 Roman sesterces per man. 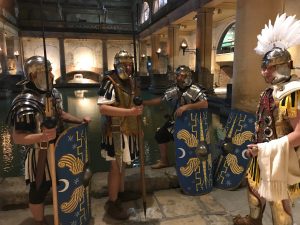 After almost 300 years The Praetorian Guards were beaten in battle by the Emperor Constantine.
They were defending his rival, the Emperor Maxentius at the battle of Milvian Bridge in 312 A.D..
Constantine won and became Rome’s first Christian Roman emperor. While the Praetorians made a valiant last stand along the Tiber River, they were soundly defeated, and Maxentius was killed. Convinced the Praetorians could no longer be trusted, Constantine disbanded the unit once and for all, reassigned its members to the outskirts of the Empire, and oversaw the destruction of their barracks at the Castra Praetoria.