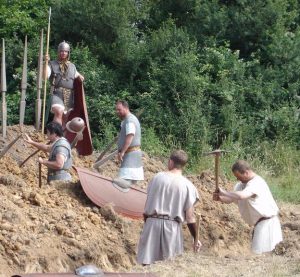 Britannia’s specialism is the later and post Roman Empire in the West.

However we can field a small amount of Flavian (1st-2nd Century AD Roman Legionaries), these are usually an escort detatchment for our gladiatorial events, but we have provided early period Roman infantrymen for various heritage events and documentaries.
Most notably for Battlefield Detectives Masada episode and combat ready legionaries working alongside the Ermine Street Guard in the re-enactment of Boudica’s last battle at Stoneleigh in 2005.
Our small detatchment of early imperial soldiers are each equipped with blunt gladius, battle re-enactment scuta (Roman shield) and will engage in full contact combat against our own ‘adversaries’ (Britons, Gauls, Germanics, & Persians). 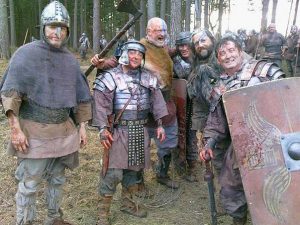 Britannia have worked with both and can recommend them highly.