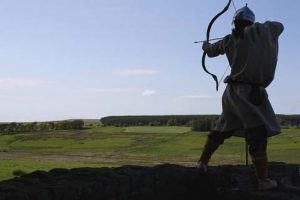 The third Century AD is often referred to as the time of crisis for the Roman Empire. Around 40 men were proclaimed emperor, many were simultaneous rivals raised
to the position in their own territories.

During this century, plague swept across the Roman Empire, many areas were de-populated to the point where military logistics were rendered useless.

This, combined with massive inflation, civil wars and relentless military pressure from invasions by Goths in the area we call the Balkans, Parthians in the Middle Eastern territories and by unrest amongst the Germanic tribes in areas such as Gaul, across the Danube and even Northern Italy, all took their toll on a weakening Empire.

Britain didn’t escape these ravages, raids from Germanic tribes on its South and East coasts, Irish (Scot) attacks on the West and Pictish incursions from the North forced the Romano British forces to fight on several fronts.

Britain was also caught up in a major rebellion (286-96AD) against Rome under the rebel Emperors Carausius and his successor Allectus, eventually Britain returned to Roman rule Consantius Chlorus moved his forces into Northern Gaul and reclaimed it for the empire in 293AD, isolating Carausius
from the rest of the empire and any support he had. However Consantius had to wait until a suitable fleet could be built to invade Britain, in this
time of uncertainty Carausius was assasinated and Allectus replaced him. His reign lasted only three more when Britain was finally invaded by
Constantius’s subordinate forces and Allectus was slain. One recent theory is that the large fortress building/consolidating work that was carried out in South Britain in this century along the area of costal defences that modern scholars refer to as The Saxon Shore Forts, was actually undertaken to keep the pro-Roman forces out of Britain rather than a defence network intended to defend Romes interests.

Order was restored at the beginning of the 4th Century AD when a succession of stronger Emperors like Diocletian (a former soldier from the area we
refer to as the Balkans), who reigned from 306 to 337AD decided to re-structure not only the army, but the empire itself. Power was to be divided between two emperors, one to govern the Eastern half of the empire and one the West, each was to rule with a deputy who would
succeed either instantly on their deaths or abdication.

The army was re-organised, and divided into static frontier troops (Limitanei) and powerful mobile field armies (Comitantenses). Units or
‘legions’ were now only 1000 strong as opposed to the 5,000 man legions of the early empire. Due to the chronic manpower shortage caused by barbarian invasions, plagues, civil wars and desertion Diocletian made military service compulsory amongst the sons of soldiers, in these desperate times many men mutilated themselves rather than serve in the army, this act was made punishable by death. Increasing numbers of mercenaries from outside the empire were fighting for the Roman army and eventually this influx of men and their own equipment would change the appearance of the Roman army for good. The classic imperial Gallic helmet amd lorica segmentata (body armour) seemed to fall out of service in the third Century AD. Soldiers were wearing long sleeved and knee length linen or wool tunics, whwn armour was worn it was likely to be ring mail, scale or lamellar, the helmets were spangenhelms or ridge helmets (adapted from Persian style headgear and far more economical to mass-produce). Shields were now largely round or oval and swords, when carried were long slashing spathas and not the short thrusting gladius swords of the early legionary.

The fourth Century was not without unrest, civil war erupted between rival emperors Contantine and his rival Maxentius, culminating in Constantine’s victory at Milvian Bridge which was attributed to the God of the Christians in 312AD (a year later the Edict of Milan was issued, which
ended the persecution of Christianity within the Roman empire). 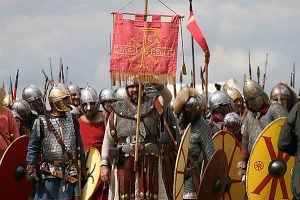 The last and most significan damage to the Western Empire began when, in 395AD the Visigoths under Alaric I revolted. In 402 AD they besieged Mediolanum, the capital of Roman Emperor Honorius. The Roman general Flavius Stilicho and his army forced Alaric to end this action and the Goths moved towards Hasta (western Italy), where Stilicho attacked it at at the battle of Pollentia (in which Alaric’s camp was captured). Further defeats forced the Goths to withdraw from Italy. However, in 406 AD many crossed the frozen River Rhine, they encountered little resistance and over-ran Gaul. More unrest and rebellion affected the Roman army because of these events and Alaric took advantage of this situation returning again in 410 managing to sack Rome itself. The admisistrative capital of the Western empire was now Ravenna but many scholars see the sack of Rome under the Christian Goth Alaric as the true end of the Roman rule. It was in this year and under these circumstances that the Western Emperor Honorius famously responded to a British request for aid by saying ‘Look to your own defences’

What remained of Rome’s territory, was defended by Flavius Aëtius or simply Aëtius, (c. 396-454), he successfully turned each of Rome’s barbarian
invaders against one another. In 436 with the help of Hunnic forces he defeated Visigoths at the Battle of Arles, and later achieved victory 436AD
at the battle of Narbonne (against fhe forces of Theoderic I). Later in 451AD he led a force which included his former enemies the Visigoths against
hostile Hunnic forces at the Battle of the Catalaunian Plains. Tragically Aëtius was killed by the Emperor Valentinian III himself because he felt
intimidated as he had once supported Valentinian’s rival. Also Valentinian was convinced Aëtius wanted to place his son upon the imperial throne.

By 476AD the Western Roman Empire was in the hands of federated Germanic tribes and when they finally revolted under Germanic General Odoacer (the
son of Attila’s General Edeko) The Emperor Romulus Augustus was deposed. The Empire in the West had finally fallen. The Eastern Roman Empire (Byzantium) was to persist for 1,000 more years and for two centuries after Rome’s fall, carried on trying to win it back in a series of campaigns (most notably under Belisarius), eventually, its strategic and economic importance had faded as the Byzantines became more concerned with problems on their immediate borders.