We feel as a society that we need to expand what we can offer as a group and so a new project is considered every year and in early 2007 Britannia decided to invest in two Pictish/Scot style War Curraghs relevant to the 5th Century AD. 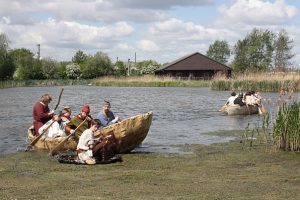 There are a few societies that display ancient marine technology and we wanted to concentrate on something as an alternative to the standard wooden hulled boats, so we opted for two 15ft long craft made of wicker and hide.

We found that it was not just relevant to what some academics might refer to as the ‘Celtic fringes’ of Britain, but the principle of hide boats is far more widespread culturally and chronologically than we’d first realised.

Hide boats, due to their perishable organic construction will almost never have left any direct evidence of their existence in the archaeological record.

But we do have plenty of narrative (and as just mentioned, artistic) Late and Post-Roman evidence to support their existence.

The earliest known reference to what could be small hide-boats (coracles) is in The History of Herodotus, (about 424 BC). This Greek historian describes boats ‘round like a shield’ travelling down the river to Babylon. 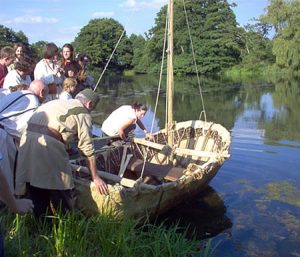 Coracles & larger Curraghs are still used in parts of Great Britain (Wales, Scotland and Ireland) and have been for centuries, despite having little archaeology to refer to. Evidence of what could be wicker framework has been identified and certainly an oak paddle have been found at Flag Fen (near Cambridge, UK) the principle hasn’t changed. The best surviving visual evidence is the Broighter boat, amongst other objects in this impressive 1st Century BC hoard was a gold model of a nine-benched sailing boat found buried in Lough Foyle, Derry, Eire in 1896 (A smooth hull and lack of any obvious keel (features associated with wooden boats) makes the gold Broighter Boat likely to be a representation of a small hide ship).

In an account Julius Caesar writes about sea currachs with sails that roved the North Sea and the Atlantic. There are references by the later Roman writer Vegetius who describes light buoyant canoes and emphasises how vital it is to be able t cross rivers effectively on campaign – this may mainly refer mainly to wooden canoes, but references to improvised reed and animal hide rafts are also made by him. Avienus was a Latin writer of the 4th century. (full name Postumius Rufius Festus). He wrote Ora Maritima (“sea coasts”), He clearly mentions curraghs and the movement of peoples across the sea.

Closer to home we can refer to St Brendan the navigator, he lived between 490AD and 570AD he is known to have sailed to Iona and an account of a long sea voyage West Navigatio Sancti Brendani Abbatis appeared 200 years after his death. This describes a curragh made of ox-hides stretched over wooden frame and coated in wool grease carrying Brendan and 14 other monks on a voyage to ‘the promised land’.

Our curraghs are seaworthy, but we prefer to use inland waterways. They are also available for hire as part of a living history presentation on water or as part of a static dry land display.

Our curraghs were made by Peter Faulkner.

For more research detail, please refer to our articles section.