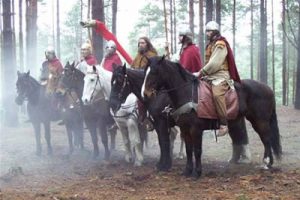 At the beginning of the 5th century, after nearly 400 years of occupation, the province of Britannia entered a period of crisis which would see it transformed from a Roman diocese to a patchwork of petty kingdoms ruled over by native, Germanic and Irish warlords. Whilst the overall lack of written evidence makes it impossible to establish with any certainty the course, sequence, chronology and nature of the events that took place, enough elements can be pieced together to construct a reasonable narrative, although any attempt to do so is always open to criticism and alternative interpretation.

In the late fourth century Britannia was under attack from increasing numbers of Pictish, Irish and Germanic raiders, leading the great general Stilicho to send military aid to the province in 398AD but he was forced to withdraw the legion that he sent just 4 years later to fight against the Visigoths in Italy. A few years later the government of Britannia sent envoys to beg for aid from the Imperial authorities but were told that Rome “could not go on being bothered with such troublesome expeditions… the Britons should stand alone, get used to arms, fight bravely, and defend with all their powers their land… they should not hold out to them for the chaining hands that held no arms, but hands equipped with shields, swords and lances, ready for the kill.” Given no other option, the towns of Britannia looked to their own defences. Many of the wealthier citizens took the decision to emigrate to Gaul rather than remain in the abandoned province. Some took their wealth with them, others buried it, hoping to return for it at some later date. From the number of hoards that have been discovered, it seems that few (if any of them) ever did. Those who remained suffered a decade or more of raiding from “the foul hordes of Scots and Picts. …they seized the whole north of the island from its inhabitants, right up to the Wall” beforeappealing once more for help, this time from Aetius, the military commander in Gaul but, again, no help was forthcoming. In desperation, the Britons chose to employ Germanic troops offering them land in return for service. The hiring of such foederati was an established Imperial policy and worked well enough for a time but, as the number of settlers increased, the need for land became greater and it was only a matter of time before the incomers began to turn against their employers.

It is here that history starts to merge with legend and the famous names of Vortigern, Hengest, Horsa, Ambrosius Aurelianus and Arthur appear. Which of these great figures of British history existed and which are a combination of myth and reality is impossible to say but what does seem clear (if we combine the scarce written evidence with the much more abundant archaeological record) is that there followed a long period of Germanic immigration and expansion northwards and westwards across the island in bid to carve out new lands for themselves whilst native Britons resisted and struggled to maintain their ‘Romanitas’, their Roman identity and way of life. It seems that the Britons rallied under the leadership of Ambrosius Aurelianus and, after a series of battles, the main Germanic advance was halted at the siege of Badon Hill where the Britain’s use of roman cavalry tactics (possibly under the command of a young general called Arthur) may have been decisive. This British victory seem to have been so overwhelming that some of the Germanic forces sailed back to their homelands and there followed a period of relative peace, but the province had suffered dreadfully. Gildas, writing during this period, says that “the cities of our land are not populated now as they once were; right to the present they are deserted, in ruins and unkempt. Foreign wars may have stopped, but not civil ones. For the remembrance of so desperate a blow to the island and of such unlooked for recovery stuck in the mind of those who witnessed both wonders. That was why kings…kept to their own stations. But they died; and an age succeeded them that is ignorant of that storm and has experienced only the calm of the present”. With it’s cities starting to crumble, it’s leaders squabbling amongst themselves rather than consolidating their positions and it’s citizens suffering the ravages of civil strife and outbreaks of plague, the Britain of the mid-6th century was a shadow of the roman province of only a 150 years earlier. When the old Germanic enemies, the tribes of Angles, Saxons, Jutes and Frisians began to grow and expand again, it seems that there was no-one strong enough to mount an effective defence, let alone a counter-attack as there had been under Ambrosius. Within 25 years the Saxons had pushed their boundaries northwards and westwards from their lands in Hampshire as far as central Somerset and, in 577 won a great victory at Deorham near Bath. There the British ‘kings’ of the Roman cities of Gloucester, Cirencester and Bath were killed and the Saxons reached the Bristol Channel. For the first time, the Britons of the West Country were cut off from their allies in Wales and the North West and, from then onwards, the transformation of most of the province of Britannia into England was inevitable.