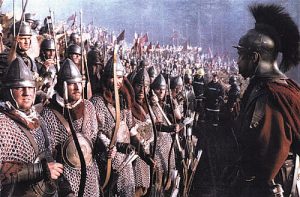 Our attitude to filming is that whether it’s a comedy, documentary or big budget feature film we apply the same versatile approach… we are there to do a professional job, offer advice and creative input even helping to dress the set when asked.

We specialise in realistic combat, we are not qualified stunt people, however, we can provide realistic and safe fighting action as well as ancient military drill and tactics.

We also think background action from inexperienced extras can sometimes suffer if people are not sure how to dress in period costume, interact with props and film crews or use the weapons realistically.

That’s where we come in.

Voted Reenactment Society of the Year
by Military Illustrated Magazine 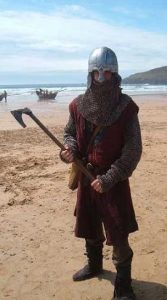 `Britannia are a real pleasure to deal with, they are not only extremely knowledgeable about their subject but also so affable to work with and a good laugh which is most important on long shoot days. They are thoroughly professional and clearly love what they do. I would not hesitate to recommend them’.
(Adam Jenkins from BAFTA-award winning series Horrible Histories). 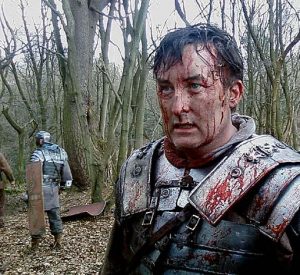 Britannia – `Thank you so much for the Games which exceeded all my expectations’.
(Jack Lohman, Director Museum of London, following Britannia’s staging of the Gladiatorial Games at London’s Guildhall Yard).

`Britannia stages dramatic, authentic reconstructions of gladiatorial combat, their costumes are astonishing and they’re committed to making their battles look as bloodthirsty as possible’.
(Daily Express).

`Goodness, but it’s violent out there and, after the warmup; in which gladiators cut the throats of a few, unresisting, condemned prisoners; the crowd goes wild’.
(The Guardian on Britannia’s Guildhall Gladiator show).

`It really paid off having Britannia on set’.
(Neil Marshall, Director, Centurion).