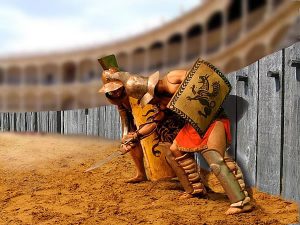 Gladiatores Britanniae are a mixed bunch… a cross section of Romano-British society at the end of the first century AD. Among them you will find soldiers who found themselves on the wrong side of mutinies, criminals, slaves born to fight as well as debauched citizens who long for the thrill of the arena. Some of them are fair-minded types. Others are more `creative’ when it comes to defeating an opponent. It may end in tears…or even worse.

Imagine for a moment. You are sitting in the amphitheatre in Londinium, waiting for things to start. A cheer goes up as trumpets blast, sending the wading birds feeding on the mud flats of the Thames wheeling up into the sky above you. From within the bowels of the arena, the pompa emerges – the summa rudis, Charun, Hermes, the libitarnii, the priestesses of Fortuna and finally – the gladiators themselves. 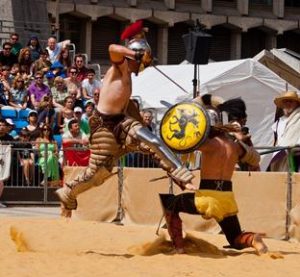 You can expect a good day. Petronius Fortunatus, a wealthy wine merchant has paid for the games. After all, it’s not every day the Emperor himself makes a surprise visit – and…well – it would be fair to say that the Roman Army gets through an awful lot of wine…

We decided to concentrate on the gladiators of the provinces in the 1st century AD, as there is a greater amount of archaeological and narrative evidence to call upon from that period, also we wanted to cultivate the weathered provincial look and as there are at least 20 known amphitheatres in Britain we’re rarely short of authentic venues.