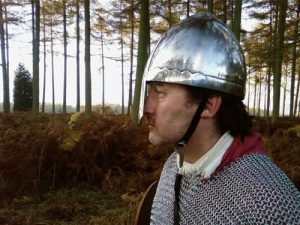 Britannia also has an 11th Century section.
This is quite a jump from our chosen core activities of the Later Roman era and Flavian period gladiators in Britain, however the 11th Century is a popular period to re-enact in the UK and we have enjoyed working closely with societies such as The Vikings and Conquest on many heritage projects such as the large re-enactment of the Battle of Hastings at the site of the original conflict in Battle Abbey, East Sussex and filmwork.

We specialise in playing Bretons and have chosen a unifying design for our Breton ranks that is based on shields featured on the the Bayeux Tapestry.

In 2007 we were called upon to play the opposition society ‘Alan’s Lot’ in the romantic British comedy feature Faintheart.

We provided a very distinct ‘Norman re-enactment group’ as foils for the main character’s society.
Our leader ‘Alan’ was played by comedy actor Kevin Eldon (below)