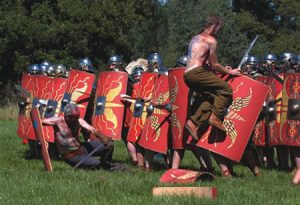 Britannia have portrayed Iron Age Britons and Gauls for a variety of television documentary productions and heritage projects.

Although not our specialised period we were called upon to re-enact Boudicca’s last battle for English Heritage (at Stoneleigh). Members of Britannia played Boudicca’s horde and some of the Roman legionary opponents. We teamed up with the Ermine Street Guard for what was to be a highly successful battle watched by 20,000 people in 2005.

Although it’s impossible to give precise dates for it’s start, it’s commonly accepted that the Iron Age period in Britain lasted from the 7th Century BC until the Roman invasion of 43AD. Until fairly recently, popular opinion held that the features of Iron Age culture (iron tools, artistic styling and even languages) arrived from the continent on a wave of invasions from Continental Europe but this has now given way to the notion that the integration of these new developments was primarily as a result of a cultural rather than a physical migration.

There certainly was some immigration into Britain during this period (most notably of the Parisii into the area around modern-day Hull and of the Belgae into Kent) and contact between some of the tribes of Britain and those of Gaul is well attested to both in terms of archaeological artefacts and in some Roman texts. However, it seems unlikely that thes immigrants arrived in sufficient numbers to replace the native population.

A lack of written native records means that, for the most part, we know very little about the structure, politics, religion etc of Iron Age Britain prior to the 1st century BC except that which we can surmise from the archaeological record. The massive increase in the building of hill-forts during this period is a clear indicator that it was a time of tribal or even inter-community conflict. With small-scale farming being the primary occupation, rustling of live-stock (like that immortalised in many of the Irish legends from the period) was a common occurrence which presumably lead to the development of these short term (the lack of water sources at most of these rules them out as long term settlements) defensive locations. This, combined with the (admittedly partisan) writings of Roman historians gives the lie to the impression given by some writers that pre-Roman Britain was an island of tribes unified by any ‘Celtic’ sense of identity.

In fact, contrary to popular opinion, it’s incorrect to think of Iron Age Britons as being ‘Celts’ at all. This notion was an invention of the eighteenth century and developed after the realisation that the non-English languages of Britain were closely related to the dead languages of the ancient continental Gauls who did (according to Julius Caesar) call themselves Celts. Before that, no-one referred to the Iron Age Britons as Celts any more than they themselves would have done. As interest developed in the pre-roman culture of Britain the term ‘Celtic’ was applied to those languages seen to have a common root but it’s use as a handy, catch-all term soon spread to insular monuments, art, culture and peoples (both ancient and modern) and so the idea of Britain as a ‘Celtic Nation’ was born.

So, next time someone tells you that they’re of Celtic descent and that they’re searching for their heritage, tell them to start looking in France.

You can tell them that you can’t tattoo yourself successfully with woad either.