“I have made a heap of all that I could find!”
Nennius (History of the Britons).

OUR APPROACH
Britannia is a battle re-enactment society with a living history wing.

As a society its roots are firmly planted in the spectacle and pageant of
the numerous groups that performed ‘historical presentations’ for the public
before the advent of living history.
(Living history & experemental archaeology are relatively new disciplines
that have grown out of the academic/research side of historical
re-enactment, many archaeologists, television production units and authors
now regularly consult re-enactment groups and individuals on a range of
subjects).

WHAT IS ACCURATE?
This is a matter of some debate amongst historians, archaeologists,
re-enactors, wargamers, film wardrobe departments and illustrators.
The best way of summing our approach to this difficult question is to say:
without the facility of a time machine we cannot truly say how equipment,
clothing and weaponry was used -all we can do is
offer our best interpretation given the evidence that we have.

Right – The Tetrarchs – statue in San Marco, Venice (305AD) of the four rulers of the Empire – a senior `Augustus’ and a junior `Caesar’ from each half as resort of political reforms by Diocletian.

For an ancient period such as our own we have the following evidence:
artistic – fresco painting, sculpture (such as the Tetrarchs, right) and mosaic, numismatic (coin imagery), narrative (surviving commentary primary and secondary evidence) and of course archaeological material like the crossbow brooch (pictured above).

Often these elements provide enough material from which to base convincing
reconstructions, but occasionally where there is no evidence whatsoever
guesswork and common sense have to be employed.
(Also there are occasions where the health and safety of participants and
crowd mean that total historical accuracy has to be compromised).

BEST OF BOTH WORLDS

Despite being battle re-enactors, we have concentrated on researching many
aspects of ancient life and warfare, from clothing, medicine, transport diet
and military equipment.

The periods we had chosen to represent were obscure and lacked much in the
way of source material, because of this we had put a great deal of time into
research and reconstruction, constantly revising and refining our
conclusions.

In doing so Britannia members have written two books and advised on several
other publications:

In essence we want the best of both worlds, we want the entertainment and
spectacle of the old style battle re-enactment groups, but we also strive
for the credibility of living history and research associations.

Our aim is to provide thrilling combat displays in the most historically
credible arms and equipment possible. 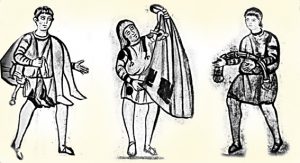 Right: Three figures from a 4th Century fresco in Bulgaria carrying trousers with integral socks, a cloak with a crossbow brooch and a broad Roman belt. This fresco is a typical of the sources of information that we employ in addition to archaeological evidence.